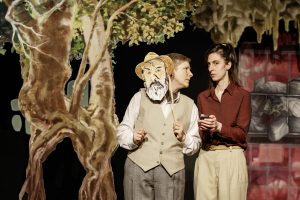 For the KAHO, the choreographer Antonia Baehr and the artist and filmmaker Lucile Desamory adapted the production “Die besondere Perücke” which they jointly developed in 2020. The theme is what lies beyond theatre operations, meaning what the visitors usually don’t notice: setting up and dismantling, disused stage sets or the invisible work of costume designers and make-up artists. To bring these things to the stage, Baehr and Desamory present improvised songs, messages, dreams and magic tricks.

Since operations already ceased at the KAHO back in 2007, their research is based on a VHS cassette with recordings of a rehearsal by the American director Robert Wilson, among other things. In the early 1990s, Wilson rehearsed for the opera “Doctor Faustus Lights the Lights” by Gertrude Stein in the former Theater Karlshorst. Antonia Baehr was present at the time and videotaped the rehearsals from the gallery. She is therefore one of the few contemporary witnesses and consults her own memories.

Note
talk with Maren Witte / TANZSCOUT Berlin after the show