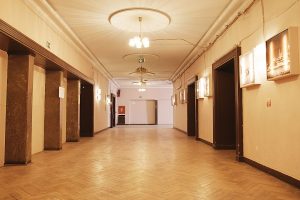 During Open Monument Day, the Stiftung Stadtkultur offers guided tours of the foyer and stage tower of the KAHO. The team of the Stiftung Stadtkultur gives an account of the chequered history of the KAHO, a former house of officers for the Soviet army and later a private theatre in the eastern part of Berlin, whose stage remained unused from 2008 to 2020. “On the search for the lost archive, we met numerous persons for whom the KAHO brought back memories”, says Pirkko Husemann, the Director of the Stiftung Stadtkultur. “For some, it smells like a Moscow kindergarten inside the KAHO, others are fascinated by the spotlights that were formerly used in the Palace of the Republic, while others again recall the American theatre-maker Robert Wilson, who rehearsed an opera here.” A topic is also the challenges posed by the reconstruction of the building to a modularly usable event location, which will presumably be completed in 2025.

In the frame of Open Monument Day

After the guided tour we recommend a visit at the nearby Museum Berlin-Karlshorst: https://denkmaltag.berlin.de/denkmal/?id=5141

Language:
in German and Russian

Meeting place: entrance to the foyer

Wheelchair-accessible to a limited extent – participation possible upon advance notification